It’s a staggering amount for a contract that only lasts 8 months, the law firm McCarthy Tetrault is being paid $5,320,766.60 in a sole sourced contract. A contract worth almost 10% of the inquiry’s $54 million budget.

What is the work for?

Well at this point, that is unknown. Despite phone calls and multiple emails, my three simple questions to the inquiry have gone unanswered. Given all the coverage of problems at the inquiry, a contract like this should raise questions and those questions should be answered.

The official notice of the contract, which began on September 6, 2017 and ends on May 15, 2018, states that the contract work is for, “Other business services not elsewhere specified.”

That doesn’t tell you much and neither does the reason given for not putting this contract out for a full and open competition, “Consulting Services Regarding Matters of a Confidential Nature.”

Is that sufficient for a contract so large?

I doubt the folks at McCarthy’s are working 10 hours a day, 7 days a week. We don’t even know how many people are working on this contract.

We have no clue what this money for. We have no clue why a single Bay Street law firm is getting 10% of the inquiry’s budget and without any of that knowledge, no one can determine how or if this large payment is doing anything to help the families the inquiry is supposed to be there for.

The questions I sent to the media and communications team were quite simple and straightforward, yet after giving them 9 days to respond, nothing. Here are those questions.

1. This contract appears to be sole sourced, is that accurate and if so, why was it sole sourced?
2. What kind of legal services are required by the inquiry that could not be conducted by the thousands of lawyers on staff at Justice?
3. What is being done for this $5 million over eight months?

Now, there is nothing illegal about an inquiry like this giving out a contract on a sole sourced basis, that is a power they have under the inquiry act but if we are paying the money, we should know why it was sole sourced.

There is also the question as to why the hundreds upon hundreds of government lawyers already on staff could not have been assigned to do this work. The Justice Department literally employs hundreds of lawyers and assigns them to work with government departments, agencies, etc.

Over the course of the inquiry there have been a multitude of stories showcasing mismanagement, resulting in many high profile resignations and complaints from family members about a lack of respect including the high cost of them participating, often travelling long distances to appear at hearings.

I’m sure the folks at McCarthy’s aren’t wanting for travel funding. 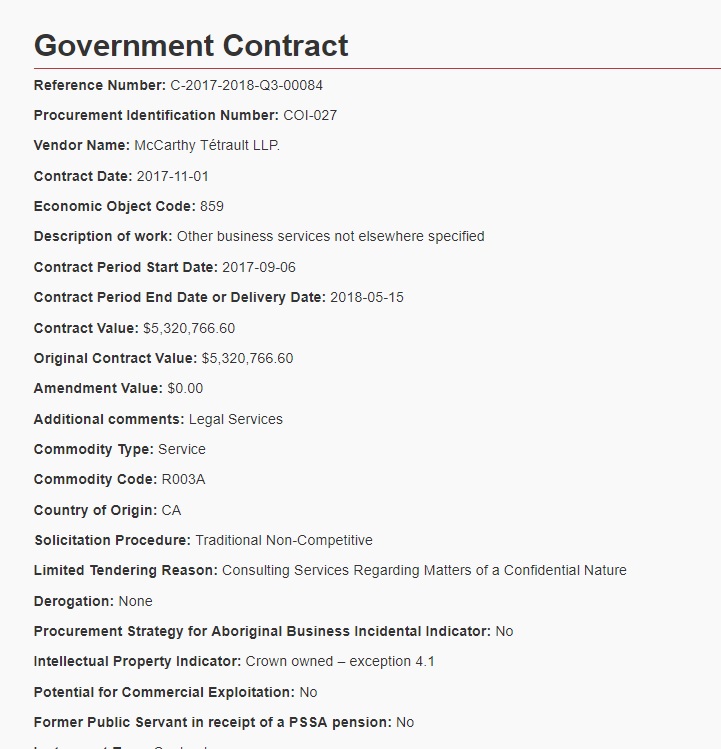