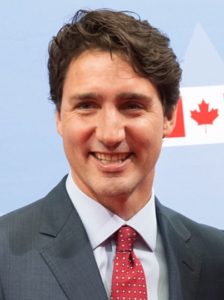 Bombardier is Justin Trudeau’s true priority, that much is now clear.

Sure, since coming to office Trudeau and his Liberals have tried to claim that they have other priorities such as reconciliation with First Nations, helping the middle-class and those working hard to join it, or ensuring that the relationship with the United States remains stable.

But these last few weeks have shown us that Bombardier trumps all.

The latest proof is that the needs of the men and women in the military are being put behind the needs of Bombardier.

Just 10 months ago, Defence Minister Harjit Sajjan announced that Canada would buy 18 Super Hornet fighter jets from Boeing to make up for the “capability gap” the Royal Canadian Air Force was facing without new planes.

“We need additional planes as soon as possible for an interim period,” Sajjan said last November. “Having a new squadron of interim aircraft will mitigate those risks significantly as we address the capability gap.”

On Tuesday, the US Commerce Department sided with Boeing over claims that Bombardier was selling planes in the US “at absurdly low prices”, something they were able to do thanks to subsidies from Canadian taxpayers.

The response from the Trudeau government was quick, no more fighter jets.

“The Government of Canada cannot treat as a trusted partner a company which is attacking our aerospace sector,” Foreign Affairs Minister Chrystia Freeland said within hours of the decision from Washington.

Can the military treat as a trusted partner a government that puts the interests of one company ahead of the safety of our men and women in uniform?

Canada’s fleet of CF18 fighter jets is aging and will soon be obsolete if not replaced. The Liberals campaigned against buying the F-35 and said they would look at other, more affordable options, such as the Super Hornet.

And that was the plan until Boeing acted against the real priority of this government, Bombardier.

The military is taking a back seat to protecting a privately-owned company that is tightly controlled, and badly run, by one very wealthy Montreal family.

Trudeau will take this to a trade war status with the US if he has to, and run it as a Canada vs. the United States issue rather than two companies fighting it out.

“We won’t do business with a company that’s busy trying to sue us and trying to put our aerospace workers out of business,” Trudeau said last week.

While it’s understandable for Trudeau, or any prime minister, to go to bat for Canadian industry, putting one company ahead of the entire country is not.

Now he is showing his preference for Bombardier over our Air Force pilots by telling them they can fly old planes while he stands up for what really matters – his friends.