“Buck-a-beer is coming to a shelf near you,” said a jubilant Doug Ford.

Ford made the statement in a stroke of political marketing genius. Just before 3 pm on the Friday of a long weekend, just as people were getting ready to head to their cottages or backyards and……drink beer….. he released a video on social media.

By 4pm it was all over the newscasts of the talk radio stations Ford’s supporters listen to on their drives. It was on the 6 pm tv news, it was all over social media and online news sites.

The official announcement hasn’t even been made yet, that comes later this week.

Of course the announcement has it’s critics.

There are people that look down their nose at this sort of thing. Scott Simmons, president of the Ontario Craft Brewers told Canadian Press it will be bad beer.

“It can’t be very good, let me put it that way,” Simmons said.

Not everyone wants to drink a mango fruit-infused saison, some people just want beer.

Before buck-a-beer vanished from Ontario shelves thanks to the previous Liberal government, two of Ontario’s top ten selling brands were brewed by Lakeport of Hamilton.

Lakeport dominated the buck-a-beer market along with Laker, brewed by craft brewer Brick of Waterloo.

In fact Lakeport went over the course of just a few years from 1% of the market to 11%. Then Labatt took over Lakeport, lobbied the government to raise the minimum price and shut down their competition.

A win for the big corporations that became Dalton McGuinty’s friends, a loss for the little guy trying to enjoy beer and not pay through the nose for it.

We have cheap beer in Ottawa. 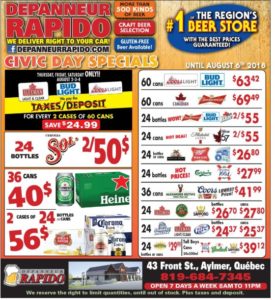 Funny enough, in McGuinty’s hometown of Ottawa, anyone that wants cheap beer can just head over to the Quebec side of the Ottawa river and get beer at just about a buck a bottle.

Take a look at this ad for Sleeman, Miller Lite or Moosehead Light for $24.37 a case. If that doesn’t grab you, two cases of Sol for $50 is darn near a buck-a-beer.

That is a hell of a lot better than the $42.95 a  case charged for Sol in Ontario at the foreign owned Beer Store monopoly.

The other issues with bringing back buck-a-beer that Simmons raises are a bit more legitimate than his snobby attitude. He points to the cost of making beer going up – from inputs, to labour to the taxation issue.

It made me think, much of the reason that beer is going up has to do with government. Specifically, government taxes and regulations.

We all know Kathleen Wynne and her Liberal government raised the minimum wage which put wage pressure on all employers even if they were paying more than the minimum. Less well known are the other costs.

Wynne increased the complexity and regulatory burden of hiring anyone. Which drives up costs.

At the federal level Justin Trudeau and his Liberals imposed what is called an escalator tax on beer and all other forms of alcohol. Every year the excise tax goes up 2% or the cost of inflation. They passed that in the 2017 budget so that they don’t have to vote to increase the price of beer every year.

Just like with his carbon tax, Trudeau wants your life to be more expensive while Ford wants it to be more affordable.

It really is a difference in world view.

Trudeau wants to take more out of your pocket, Ford wants to leave more in it.

I know which political leader I would trust to lower taxes and it isn’t Justin Trudeau.

Let’s hope Ford lowers taxes for all industries on his way to restoring Ontario to prosperity.

Until then, thanks for buck-a-beer Doug.

Is an NDP-Liberal coalition coming this election?

June 2, 2018 Brian Lilley Ontario Politics Comments Off on Is an NDP-Liberal coalition coming this election?

Andrea Horwath recently ruled out a coalition with Kathleen Wynne and the Liberals but then this week, opened the door to a deal. “I’m going to wait until Thursday of next week and I’ll go […]

It’s the type of headline you would think that Ontario’s opposition parties would dream up, hallway healthcare is now so commonplace that a major hospital in a major city has come up with rules to […]