Do we need to dump Laurier for his racist acts?

This week Halifax Regional Council voted to remove a statue of Edward Cornwallis over his October 1749 scalping proclamation. Just a few weeks ago a pub located in the building that used to house the law offices of Sir John A. Macdonald changed its name from  “Sir John’s Public House” to “The Public House” after complaints about his role in the residential school system.

Well at the risk of starting something that will remove any and all historical names from Canada’s public life, it may be time to drop Sir Wilfrid Laurier from the $5 bill, from the many schools and streets named for him and as the name of the top tier club for Liberal Party of Canada donors.

Simply put, Laurier, based on the historical record, was quite the racist. 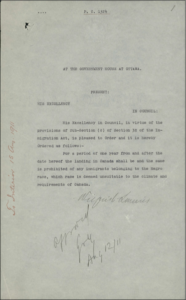 Did you know that in August of 1911, Laurier signed an Order-in-Council restricting black immigrants to Canada?

The country was looking for immigrants to fill the vast tracts of arable land on the prairies and was advertising free land but they didn’t want just anyone and so Laurier, who apparently also had a hierarchy of what type of Europeans were best, joined his cabinet in trying to stop black immigration to Canada.

“For a period of one year from and after the date hereof the landing in Canada shall be and the same is prohibited of any immigrants belonging to the Negro race, which race is deemed unsuitable to the climate and requirements of Canada.,” reads the document.

You can clearly see Laurier’s signature on the order.

The order was repealed in October but many believe only because other tactics, such as harassing black immigrants at the border and sending agents of the immigration department to places like Oklahoma to convince black Americans that Canada was not good for them had worked so well.

It’s worth noting this as we kick off Black History Month but this is by no means the only racist policy of Laurier.

In 1885 the Government of Canada under Macdonald brought in an act that required any Chinese immigrant to pay a $50 head tax in order to be admitted to Canada. That was no small sum in those days and it was clearly meant to try and stop Chinese immigration which Macdonald and others saw as undesirable.

So where does Laurier kick in?

Well by the time he became prime minister in 1896 the Macdonald policy had not worked so within a few years he increased it from $50 a person to $500 and expanded it to include Japanese Canadians. Here is how The Canadian Encyclopedia puts it:

By 1902, it was clear that the head tax had not diminished Chinese immigration — even after it doubled from $50 to $100. A second inquiry, the Royal Commission on Chinese and Japanese Immigration, recommended that the head tax be increased to $500. This last fee, instituted by Parliament in 1903, was the equivalent of two years’ salary or the purchase of two homes.

Oh, and it was brought in by William Lyon Mackenzie King, another Liberal hero and the man on our $50 bill. 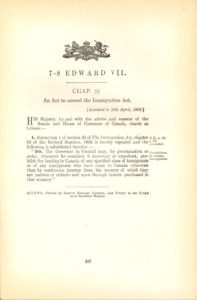 Long before Mackenzie King was prime minister, he was a civil servant and in 1908 while King was serving as Deputy Minister of Labour, he recommended to the Laurier government that they effectively ban immigration from India and Japan by enacting regulations that said anyone coming from Asia had to come via a direct passage route, no stops or refueling.

The government of Laurier agreed and signed an Order-in-Council stating to, “…prohibit the landing in Canada of any specified class of immigrants or of any immigrants who have come to Canada otherwise than by continuous journey from the country of which they are natives or citizens and upon through tickets purchased in that country.”

It was a round about way of saying no immigrants from India or Japan. It was recommended by a future Liberal PM and approved by another. King became a Liberal  MP that same year, eventually went on to lead Canada longer than any other PM and also send more Canadians to internment camps than anyone else – Canadians of Japanese, Italian and German ancestry were rounded up.

Should these men be scrubbed from Canadian history?

By the standards of today’s activists the answer is a clear yes. Their supporters, a good many Liberal Party supporters with photos of Laurier and King up in their homes (yes, such people exist) will be claiming that we can’t hold the people of the past to today’s standards, that is presentism.

Things have changed we will be told. Look at the good that they did.

It’s a valid argument but one that the current Liberal Party threw out the window when Prime Minister Justin Trudeau announced he was changing the name of the building that houses his office from Langevin Block to the Office of the Prime Minister and Privy Council because of complaints of the role that Sir Hector-Louis Langevin may have played in the establishment of residential schools.

The cases against Laurier and King are far stronger than they were against Langevin, a Father of Confederation and Conservative politician, and yet Langevin is gone and the others remain.

So we either tear down Laurier, King and any other person from our past with policies and ideas we would find abhorrent today or we sit down and have rational discussions about the good and the bad parts of our history and hopefully learn from them both.

I’d vote for the latter.