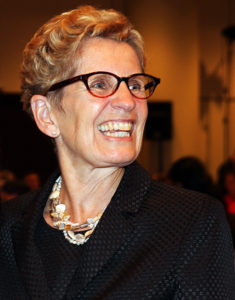 Another week, another trial for Ontario’s scandal plagued Liberal government.

Last week it was the Sudbury bribery case where two top Liberals are facing charges alleging that they offered jobs to a candidate to drop out of a by-election, today it is the start of an older but not forgotten Liberal scandal.

Anyone remember the more than $1 billion we paid out to cancel gas powered electricity plants in order to save Liberal seats in areas like Mississauga and Oakville?

The trial begins in Toronto later this morning and sees former top staffers David Livingston and Laura Miller face charges of breach of trust, mischief and unlawful use of a computer over claims they deleted emails related to the gas plant cancellations. These are theoretically more serious charges than the bribery charges being heard before a court in Sudbury.

It will be interesting to see what kind of defence Livingston and Miller come up with because what we have seen so far in the Sudbury bribery trial is nothing short of bizarre.

In Sudbury, lawyers for Premier Wynne’s former deputy chief of staff Pat Sorbara and local Liberal rainmaker Gerry Lougheed claimed that their clients didn’t violate the law because Andrew Olivier wasn’t the nominated Liberal candidate when they offered him jobs or appointments.

I guess the defence lawyers read Ontario’s Election Act selectively because when the act lays out who is or can be candidate it doesn’t say you must be nominated by a party. In fact, that part of the law doesn’t mention political parties at all.

Of course lawyers playing word games isn’t the weirdest part of last week’s trial, that would be former Liberal candidate Andrew Olivier, the man that released the recordings showing he was offered jobs or appointments to step aside claiming he wasn’t offered anything direct.

Olivier told the court he wasn’t sure if he was being offered paid jobs to step aside.

“I wasn’t sure they were monetary or not,” Andrew Olivier said Friday in the Election Act bribery trial of former Wynne deputy chief of staff Patricia Sorbara and Sudbury Liberal organizer Gerry Lougheed.

I don’t know if Olivier was just confused in court or if someone got to him but the recordings are pretty clear.

When local Liberal Lougheed showed up to speak to Olivier he said he came on behalf of the premier and wanted Olivier to consider stepping aside for preferred candidate Glenn Thibeault.

Sorbara, Wynne’s then deputy chief of staff was even more clear, telling Olivier they just needed to know what he wanted.

Sorbara gave Olivier a menu of job options and told him to pick and now the defence lawyers, despite the recordings, are trying to make it sound as if there was no clear offer, just options.

The law is pretty clear.

Section 96.1 of the Ontario Election Act says it is an offence to, “give, procure or promise or agree to procure an office or employment to induce a person to become a candidate, refrain from becoming a candidate or withdraw his or her candidacy.”

Gerry Lougheed and Pat Sorbara effectively went to Andrew Olivier and told him he could have a job if he would “refrain from being a candidate.”

Toronto defence lawyers may be slick but that doesn’t mean they can make a judge in Sudbury ignore the plain evidence there for all to see.