After being embarrassed by their own documents reporting on hospitality expenses for the last few days, Justin Trudeau’s Liberals are saying it was all a clerical error.

As I reported on last week, the PMO posted a proactive disclosure report claiming 6 government employees and 0 guests had been served coffee at the London Convention Centre on January 12, 2018 during a cabinet retreat.

Here is what the disclosure looked like up until Tuesday afternoon. 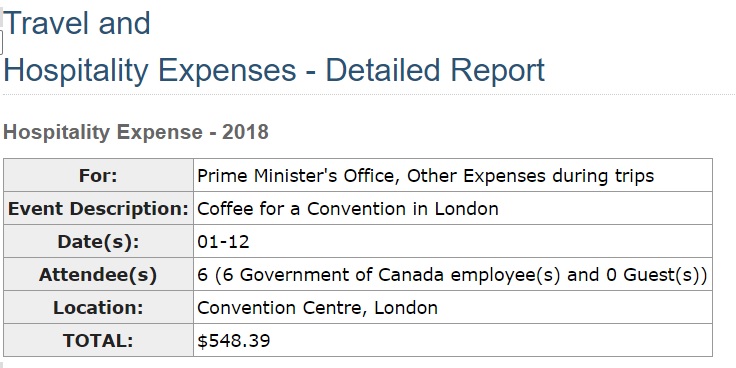 There are a few changes there.

The PMO now says it was over 2 days, not a single day event. They claim it was for the media and not government employees. And they also claim that it was 32 guests of the government and not 6 employees.

Something is fishy here and maybe it is simply bad reporting by them.

I’ll tell you why this matters. Pro-active disclosure was brought in by former Prime Minister Jean Chretien to deal with both politicians and senior government officials abusing taxpayer’s dollars. Chretien tired of the embarrassing stories of $400 lunches for two.

Part of the system is supposed to be that we can trust the accuracy of what is in the reports filed by cabinet ministers or senior government officials.

Perhaps if Trudeau and his office didn’t have a reputation for spending willy nilly on hospitality, like the booze filled flights he has taken, then this story wouldn’t have resonated as much.

Here is the episode playing out in Question Period on Tuesday.

About those “falling” border crossing numbers

It’s been interesting to watch the Trudeau Liberals claim simultaneously that there is no problem on the border and that they are fixing the problem that they claim does not exist. That is what has […]

Justin Trudeau likes China so much he gave them the Philippines

I know the Trudeau government is eager to suck up to China, and the basic dictatorship that Justin has admitted to admiring, but handing over control of other countries seems to be going a bit […]

Is it a split decision? Yes, yes it is.

June 30, 2019 Brian Lilley Canadian Politics Comments Off on Is it a split decision? Yes, yes it is.

It is funny what will get some people incensed. When the Ontario Court of Appeal issued their ruling on the constitutionality of Justin Trudeau’s carbon tax I called it a split decision. Well, you would […]