Nothing says Happy Mother’s Day like giving the Liberal Party your personal data! Celebrate mom by giving Justin Trudeau’s political operatives all your personal info so they can target you for donations!

This is nothing short of a brazen attempt to politicize Mother’s Day. The whole thing is designed to scrape data, which Liberals are good at and show their hypocrisy (see bottom of article.) 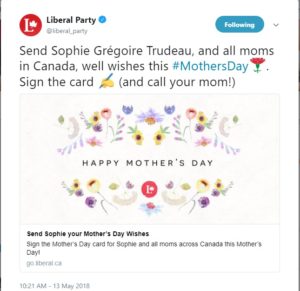 That link takes you to a page on the Liberals website where you are asked for your email, your first name, your last name and any personal message.

This they claim is a Mother’s Day card. So sweet to think of Sophie, she of the two nannies, and all the other hard working mothers across Canada. So thoughtful of the Liberal Party to prompt us to such a selfless act of kindness.

Well, I can tell you it isn’t much of a card.

“Sign the Mother’s Day card — and leave a note of your own!

Mothers inspire us every day as role models and leaders – Let’s send Sophie Grégoire Trudeau, and all moms in Canada, well wishes on behalf of the entire Liberal movement.”

It’s about money, not mom.

After you fill out your personal information you are immediately taken to a donations page. And of course there is yet again, Sophie’s smiling face.

The Liberal Party of Canada is a strong supporter of empowering and encouraging women and girls to succeed. We’re taking important action by putting women and girls at the heart of decision making in Budget 2018, working to close the gender wage gap, and taking concrete steps to inspire young women to achieve their full potential.

After that message you are prompted to give now. Moments later a fundraising email will pop into your inbox.

Nothing like turning Mother’s Day into a fundraising campaign.

Ever since the Cambridge Analytica story broke about the UK company data mining and using micro-targeting in the US presidential election, the Liberals have been aghast that anyone would do such a thing. But that is what they are trying to do here and what they have done in the past.

They want you to sign onto this list which will help them determine which subjects interest you. When you do that you help build your profile in Liberalist, their contact management software.

Who advised the party on the development of Liberalist? Christopher Wylie, the man behind Cambridge Analytica’s tactics, was thanked for his advice and support during a presentation on the new system to Liberal officials back around 2012.

Wylie also worked for the party under three different Liberal leaders – Stephane Dion, Michael Ignatieff and Justin Trudeau. As recently as 2016 the Liberals paid him $100,000 for a couple of months work.

So rest assured if you are signing this card you will be targeted.

Which is fine if that is what you want. We all sign up for emails that we want to get.

Yet here is the Liberal hypocrisy on full display. Not only will the party take your data, build your profile and micro-target you just like Wylie did for Trump, they bitch about the possibility of others doing it.

Justin Trudeau’s top advisor spent hours on Saturday taking Brad Wall to task on Twitter over a survey. Wall, the former Premier of Saskatchewan, is seeking the views of Canadians on pipeline politics via a Facebook app.

At the same time as his own party is using Mother’s Day to scrape data from Canadians wishing Sophie a happy Mother’s Day, Gerry Butts is attacking a private citizen. Butts was pushing the idea that Wall simply wanted to scrape your data.

For the record, Wall swears he won’t be using any data for any purposes other than to gather opinions.

Too bad we couldn’t say that for Gerry, Justin, Sophie and the Liberals.

I’m starting to wonder if Liberal MP Celina Caesar-Chavannes really does see a racist behind every tree and rock. Does she think every disagreement, every failure to yeild to her wishes, every slight is caused […]

Of all the things that I could have predicted Justin Trudeau to do, nationalizing part of Canada’s oil industry wasn’t one of them. I’ve been a tough critic of Trudeau, and for good reason, but […]

Of course Wynne is to blame for job losses

September 8, 2018 Brian Lilley Ontario Politics Comments Off on Of course Wynne is to blame for job losses

The governing Ontario PCs were quick to put the blame for Ontario’s falling job numbers squarely where they belong, at the feet of Kathleen Wynne. Sure the former Liberal premier lost power in the June […]