Peter Khill shot and killed Jon Styres in Hamilton in February of 2016. No one denies that.

Khill shot Styres in the dark because Styres was trying to steal his truck and lunged at him. Today a jury found Khill not guilty of second degree murder because they believed his self-defence argument.

So CBC convicted Khill of racism 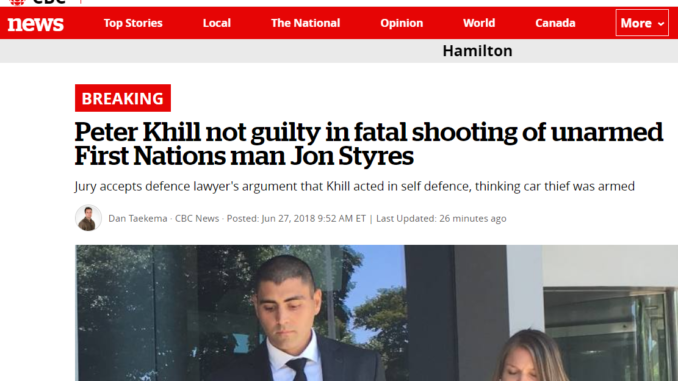 even though they admit that race was never raised in the trial. Here is a screen shot of their headline on the story.

Notice what is important to CBC, that Styres was an unarmed First Nations man. That is the narrative they want to build and in fact open their story in the same fashion.

“Peter Khill has been found not guilty of killing Jon Styres, a First Nations man from Oshweken, Ont., he believed was trying to steal his truck,” the story reads.

CBC leads their audience on.

CBC “reporter” Dan Taekema goes on to describe how this trial was being watched by Indigenous leaders, how this was being compared to the Coulten Boushie case and how jurors were screened for racial bias.

Then in the ninth paragraph, after making this all about race, CBC”s Taekema tells his readers that race was not a factor in the trial at all.

Race was never raised in evidence during the trial. In his closing arguments, defence lawyer Jeffrey Manishen did touch on the race of the two men. In the pre-dawn pitch-dark there was no way Khill could have known Styres was First Nations, said the lawyer — Khill didn’t see skin colour, he only saw a threat.

The killing of Styres is a tragedy. It shouldn’t have happened but he also shouldn’t have been trying to steal a truck and then lunging at a man with a shotgun. Despite what prosecutors, police and the media want you to believe, we can defend our homes, our families and properties.

What will make this more of a tragedy is if CBC and other media outlets turn this into their latest cause célèbre and start pounding us all with stories about race.

It isn’t the first time that CBC has done this, they did it in the aftermath of the Coulten Boushie case with a story that implied a racist police force and was so full of holes that it had to be corrected several times.

We used to be told that we should only include race in a story if it was pertinent to the facts of the story. It wasn’t in this murder trial and yet that is the CBC focus.

Which tells you a lot about their agenda. Divide Canadians.

Rancher cleared of gun charges for all the wrong reasons

Eddie Muarice is no longer being prosecuted for doing what any man in his situation would do, protecting his family. While the Alberta rancher is cleared of charges of shooting at two burglars this past […]

It’s taken three weeks, three full weeks, but media outlets are finally starting to address the Trudeau groping allegation. Funny how long it has taken and how each of the three new takes is very […]

As much as I like to rip into CBC, I normally expect better from veteran reporter David Common. He’s normally much more on the ball than his latest story on the Gerald Stanley/Coulten Boushie file […]