Get ready for the idea of a handgun ban to dominate Canadian politics this fall.

Sure we don’t have a NAFTA deal yet, we can’t get a pipeline built and the PM’s carbon tax agenda is falling apart – so let’s talk about a handgun ban.

It really is lunacy.

A new poll for CTV from Nanos Research shows Canadians support the idea while CBC quotes the head of Toronto’s police union as saying it wouldn’t do anything.

The union head is right. 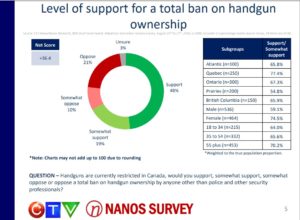 Still, let’s look at the numbers.

A full 67% of Canadians support or somewhat support a ban on handguns.

Here is the exact question asked, “Handguns are currently restricted in Canada, would you support, somewhat support, somewhat oppose or oppose a total ban on handgun ownership by anyone other than police and other security professionals?”

Now most people wouldn’t know what “restricted” means or how tough it is to get a handgun licence but that aside it is a fairly straight up and down question.

I’ve made the argument against the idea here, here and here.

Still, we know from the mandate letter given to newly appointed cabinet minister Bill Blair that Trudeau is considering, and wants, a handgun ban. Despite all evidence to the contrary.

Basically, we have a crime problem, not a gun problem. The overwhelming majority of the shootings, murders with guns and gun violence we see in Canada comes from criminals.

Criminals already break the law. They buy illegal handguns and illegal ammunition. They do this to protect their illegal drugs and enforce street law.

Criminals break laws each and every day, banning handguns from legal owners won’t change any of this.

Maybe that is why Mike McCormack, the president of the Toronto Police Association was telling CBC the other day that this will not work.

“There’s no way in my world or any world I know that this would have an impact on somebody who’s going to go out and buy an illegal gun and use it to kill another person or shoot another person,” McCormack said.

“It really has no impact on the psyche of a gunman.”

McCormack argues for greater investments in law enforcement and social services to deal with the problem both before and after the violence occurs. 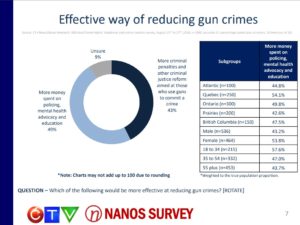 Which brings us back to that Nanos poll where Canadians were asked what the most effective strategies for reducing gun crime would be.

The poll found 49% supported, “More money spent on policing, mental health advocacy and education.” Oddly, that is not on the government’s agenda.

Nor is, “More criminal penalties and other criminal justice reform aimed at those who use guns to commit a crime,” which was supported by 43% of Canadians.

This isn’t hyperbole or overheated rhetoric, this is reality.

The Liberals Bill C-71, currently before Parliament, doesn’t address gun crime or gangs but instead makes the ownership of firearms by those that follow the rules more burdensome.

Banning handguns from people that go target shooting won’t stop someone willing to shoot to protect their drug stash from buying that illegal gun and killing.

This is the age old tactic of politicians wanting to look like they are doing something. I don’t blame the public for wanting action on increasing gun crime but the Liberal plan is off target.

In their latest story, CBC repeats the false claim that 50% of guns used in crime come from Canada. Police and politicians have been pushing that trope despite no facts to back it up.

Even CBC showed it to be false here, the Toronto Sun did here and I did it first here.

If we want to deal with gun crime then we need to focus on a few key issues.

People living in Canada’s major cities where gun crime has spiked over the past couple of years have every right to be concerned and want something done.

What they should be wary of are politicians that promise false hope and no solutions.

That is what Justin Trudeau has on offer right now.

Prime Minister Justin Trudeau likes to brag that he takes every question in the Wednesday Question Period. Unfortunately he doesn’t actually answer many questions. He really doesn’t like questions about his beloved carbon tax. Asked […]

So on Sunday, Justin Trudeau called a by-election. Just one. There are four open seats but only one of them had the election called. That ladies and gentlemen is Justin Trudeau playing games. An election […]

Harper versus Trudeau on illegal immigration

To listen to Stephen Harper speak about a serious topic like illegal immigration and then listen to Justin Trudeau on the same topic, really isn’t fair. One is a serious and thoughtful man and the […]