Andrew Scheer and the Conservatives not only have stronger support with voters than Justin Trudeau and his Liberals, they also have more room to grow.

A poll from Angus Reid Institute shows that 64% of voters will vote for, or consider voting for the Conservatives in the future. For the Liberals, only 52% said the same, the NDP reaches a potential voting pool of 44% of voters.

Rather than a straight up question of who would you vote for if an election were held today, this poll of 1,500 voters asked who they would consider supporting.

It is an important question one year away from an election. the results show that at this point, Scheer and the Conservatives have the lead.

Conservatives have biggest potential for growth. 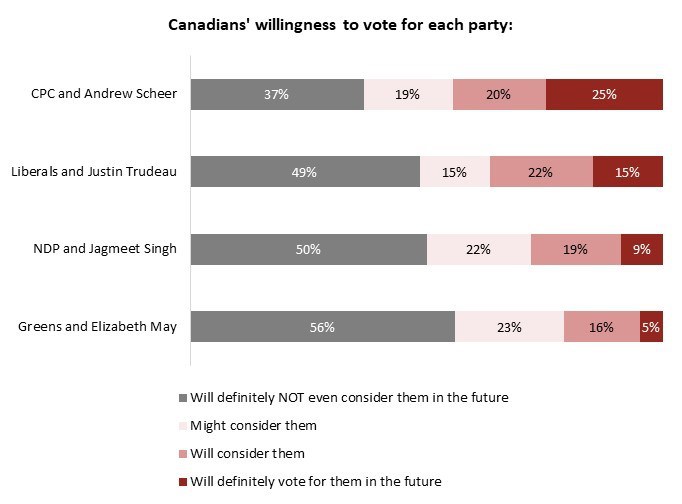 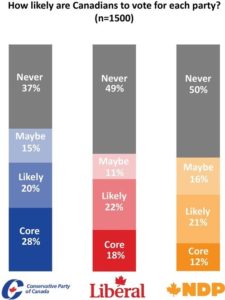 The poll also measured core support for each party and again, the Conservatives are in the lead. Note that the Conservatives have a bigger core support and much smaller group that would never vote for them. A note on the Angus Reid poll indicates that the number of people saying they would never vote for the Liberals and NDP has grown over the last while.

Ethical was not one of the top words used to describe Trudeau by his supporters.

One area where Scheer shows the greatest potential for growth is on the issue of border security. Not only does his base believe more must be done for the border, those saying they are Likely or Maybe CPC voters agree.

Another winning issue for Scheer is a weakness for Trudeau.

Among those that say they would consider voting Liberal, 54% of Maybe and 44% of Likely Liberal voters say they disagree with Trudeau’s larger than promised deficits.

Polls still regularly show Trudeau and his Liberals in the lead when it comes to voter intention. As I have often argued, you need to look beyond the top line numbers.

Most polls over the past few years that have shown a Liberal lead also show a disproportionate level of support in Atlantic Canada and Quebec with little support in Western Canada.

This poll goes beyond top line numbers to show potential support and proves once again that Trudeau  and the Liberals are not invincible.

Millennials are the demographic most sought after and talked about by political parties these days, so the latest poll from the Angus Reid Insitute must have Liberal Party HQ worried. Not only does the poll […]

Liberal MP shoots down Indian conspiracy without knowing it

The idea that Justin Trudeau’s office, the PMO, didn’t have anything to do with Jaspal Atawal being invited to not one but two receptions in India is as ridiculous as the conspiracy theory floated by […]

Trump is wrong on the tariffs and so is Trudeau

I support Justin Trudeau on imposing retaliatory tariffs on the United States only in that he didn’t have any other option. Trump swung hard at Canada and plenty of other allies when he brought in […]