The media is its own worst enemy.

If you don’t know why so many people tune out the mainstream media consider the headline and facts in this story from Canadian Press. The headline clearly claims that the PM is under pressure on semi-automatic rifles. Hmmmmm, what could that mean? 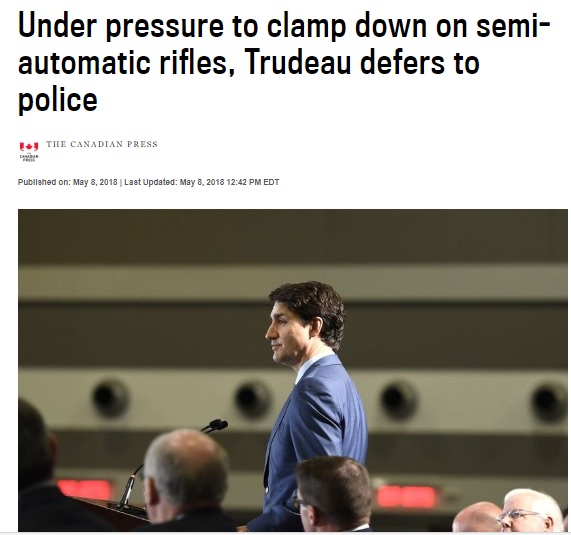 You would think with a headline like that, that the PM might be facing a petition of thousands, hundreds of thousands, millions even. That would be pressure.

No, it was 75 people according to the story.

In a letter to Trudeau, more than 75 people express disappointment the bill does not ban semi-automatic rifles like the one carried by mosque shooter Alexandre Bissonnette, who killed six people and wounded many others.

Now granted, some of those 75 are people that were wounded or family members that were shot by Bissonette in the Quebec City mosque shooting, but it is still only 75 people.

Compare that to the more than 75,000 that signed a petition calling for the PM to scrap his new gun bill, C-71.

An oddity of the position put forward is that the signatories to the letter want semi-automatic rifles banned even though Bissonette only shot one person with the rifle before it jammed. There are literally thousands of rifles like this in circulation in Canada and finding their use in a crime, be it a horrific shooting like this, or simple robberies, is rare.

So why ban something that is commonly owned by law-abiding gun owners because one man committed a truly evil act?

I don’t blame the family members asking what they have, it must be devastating.

However I do blame Canadian Press for sloppy journalism that as usual shows one side and not the other, relying on emotion and left wing talking points rather than a full assessment of the facts.

BTN Bites – Liberal gun control legislation not based in facts

They like to claim that their legislation and policy decisions are based on facts, on evidence and on science. But the gun legislation introduced by Justin Trudeau’s Liberals this week is based on emotions and […]

No, 50% of guns used in crime are not from Canada

July 25, 2018 Brian Lilley Canadian Politics Comments Off on No, 50% of guns used in crime are not from Canada

There is a talking point in heavy use by the Trudeau government, police forces and gun control activists. It claims that 50% of guns used in crime in Canada are stolen from law abiding Canadian […]