Well here is another stunning example of Justin Trudeau’s entitlement mentality. It turns out that he took what can only be described as illegal gifts while on his illegal vacation but doesn’t want you to know about them.

Now the story does a decent job of laying out the problems with the gifts, including that Trudeau should never have taken the gifts….not that he is telling Canadians what those gifts are.

Trudeau’s office says he doesn’t have to tell Canadians about the Christmas gifts he and the Aga Khan exchanged because he told Canada’s ethics commissioner.

However, the ethics commissioner’s office says information about those gifts won’t be listed in its public registry because Trudeau accepted an unacceptable gift from the Aga Khan.

But where the story falls short is in letting the gifts appear to be a simple loophole, no, these gifts that were deemed unacceptable by the Ethics Commissioner and amount to Trudeau breaking the law, violating an act of Parliament.

Section 11 of the Conflict of Interest Act states:

11 (1) No public office holder or member of his or her family shall accept any gift or other advantage, including from a trust, that might reasonably be seen to have been given to influence the public office holder in the exercise of an official power, duty or function.

Gifts are allowed under certain circumstances and protocol but that wasn’t the case here, meaning Trudeau broke the law.

His supporters will claim these are mere rules violations. Not true, this is the prime minister of the country clearly violating an act of Parliament. His detractors will want him charged and jailed. That won’t happen because this is not a criminal code violation.

And here is where the act falls short and perhaps “loophole” becomes the right word, there is no punishment for Trudeau breaking the law.

So essentially Trudeau gets off without even a slap on the wrist. As reporter Elizabeth Thompson notes, she asked the Aga Khan about his gifts to Trudeau and was told to contact Trudeau’s office. Trudeau’s office told Thompson to contact the Ethics Commissioner and of course the Ethics Commissioner cannot comment on anything outside of her report.

Trudeau and his office know this and that is why they simply repeat over and over again that any questions need to go to the Ethics Commissioner.

Trudeau’s office has ditched those rules and traditions in favour politicizing this very important Parliamentary tool.

As I write this, Trudeau is standing in the House and refusing to answer questions from the NDP on this very file, saying he does not need to tell anything to our elected officials gathered in the House of Commons because he spoke in private with the Ethics Commissioner.

Here is the Order Paper Question mentioned above. 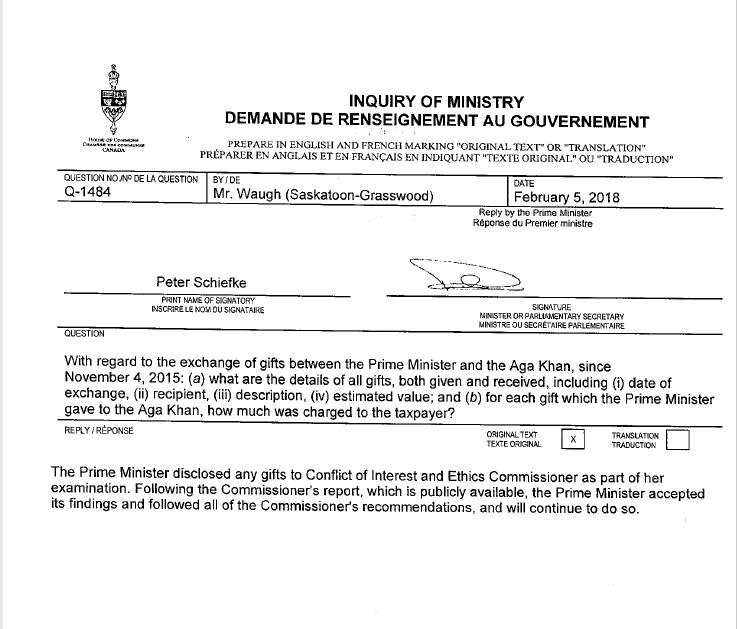 Get ready for the idea of a handgun ban to dominate Canadian politics this fall. Sure we don’t have a NAFTA deal yet, we can’t get a pipeline built and the PM’s carbon tax agenda […]

Justin Trudeau keeps telling us that he and his team are about the middle class and those working hard to join it. Well most middle class Canadians have no idea how or why coffee for […]

May 25, 2020 Brian Lilley Canadian Politics Comments Off on Canada should stand against horrid governments like China’s

It’s one of the central debates around Canada’s foreign policy right now and it’s becoming more important as Beijing tries to smother what is left of democracy in Hong Kong. Should Canada speak out against […]