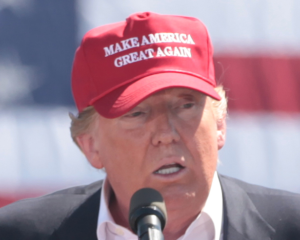 It’s something I never saw when Barack Obama was president, mainstream Canadian talking heads saying people in this country should reject the American president because he was bad for this country.

Now it is an idea that is picking up steam with Donald Trump in office in the United States.

Let’s be clear, I’m not a Trump backer or fan but neither am I a hater like so many in the media are. I take the man as he is and look at the reality, not the hysteria, surrounding his policies. It’s a view I wish were more widespread in the media for all politicians be they Trump haters or Trudeau lovers.

The latest claim that Canadians should reject Trump comes from Robyn Urback at CBC’s opinion site.

Urback argues that the folks we see wearing Make America Great Again hats in this country should put them away because cheering for MAGA means cheering against Canada.

Funny thing, I’ve been covering politics long enough to know that politicians of all stripes can be protectionist in the way Trump is now, the way Urback denounces. We do it in this country.

Don’t just think about supply management but also about industries like broadcasting or banking that are protected from American investment in Canada while our companies buy up American competitors at will. Should I expect a column on why we protect Bay Street bankers from competition even as arenas across America are branded with names like TD?

But on the larger issue of Trump and his threat to Canadian jobs, Urback, and most of the media in this country, are guilty of rank hypocrisy.

While protectionism is a disease that infects both parties south of the border, it has a stronger hold on Democrats than Republicans and that includes their two most recent presidential nominees.

In both her attempts to capture the White House, Hillary Clinton blasted NAFTA and other trade deals and even called for them to be opened up to benefit American workers and American jobs.

Here are some choice quote, you can find even more here.

“NAFTA was inherited by the Clinton Administration. I believe in the general principles it represented, but what we have learned is that we have to drive a tougher bargain,” Clinton said in an interview with TIME in February 2007.

“Look, NAFTA did not do what many had hoped, and so we do need to take a look at it and we do need to figure out how we’re going to have trade relations that are smart, that give the American worker and the American consumer rights around the world,” Clinton said during a November 2007 CNN debate during the Democratic primaries.

“First, it should put us in a position to protect American workers, raise wages and create more good jobs at home,” said a statement from the Clinton campaign in 2015.

If you are still unsure, look at this CBC report from February 2008 where Hillary Clinton promised to pull out of NAFTA if she couldn’t get a better deal.

Sounds an awful lot like Donald Trump. Of course, so did Barack Obama who agreed with Clinton during that debate hosted by the late Tim Russert.

While running to be the Democratic candidate, and president of the United States, Barack Obama called NAFTA a mistake, an unfair agreement and wanted it to be reopened to get a better deal for the USA.

Yes, he said “president of Canada.”

What did Obama want? A better deal for American workers and more jobs in America. Just like Trump is now pushing for.

Now it is true that once in office, Obama didn’t act on NAFTA, he left well enough alone. Maybe because he came to power during the global financial meltdown of 2008-09, but that doesn’t mean he wasn’t protectionist.

While those provisions were effectively nullified, Obama came back to the issue two years later with a full-throated support of “Buy American” provisions in a jobs plan authored and released by his office.

“The act, released in full by the White House this week, contains yet another protectionist Buy American provision of the type that strained the Canada-U.S. relationship for much of 2009,” said a Canadian Press story at the time.

Obama also blocked the building of the Keystone XL pipeline. While often dismissed as Obama just appeasing his liberal base and wealthy West Coast donors, which he was, blocking the pipeline also gave a leg up to the growing American oil industry which due to fracking and shale plays was beginning to thrive and create American jobs.

Did we hear about how Clinton would have been bad for the Canadian economy during the campaign? Did we see columns saying Canadians should shun Obama?

And the answer is simply one of media bias. There is the infamous study showing that in 1992, when Bill Clinton only garnered 43% of the popular vote in that year’s presidential election, 89% of Washington bureau chiefs and correspondents voted for him.

If Canadian journalists could vote in a US election I am sure the support for whoever the Democrat is would be even higher. Newsrooms across the country lean to the left, that isn’t speculation it is fact.

I don’t know Robyn Urback, we’ve never spoken, and I can’t pretend to know her politics. My observation is that she is normally one of the folks willing to go against the grain and be contrarian in an industry where groupthink too often reigns supreme.

So this piece surprised me, but maybe it shows what can happen to all of us when the air we breathe, the water we drink, the atmosphere we exist in is filled with non-stop Trump bashing based more on feelings than facts.

Let’s put the feelings aside and focus on facts.

Trump gets a win on North Korea

Make no mistake about it, North Korea’s declaration that they will give up their nuclear weapons program and have requested to meet with Donald Trump is nothing short of a fantastic win for the American […]

Things are unraveling quickly on the Canada-U.S. trade file and that puts millions of jobs and millions of Canadian workers at risk. Last night, Donald Trump took aim at Canada again, even did a Justin […]

I can’t underscore this enough, leaking an embarrassing story about the president that you are negotiating a trade deal with is stupid. Especially a president often described as having a thin skin when it comes […]