So did he say he was proud of tripling the budget or not?

Last week, The Brampton Guardian, part of Torstar’s Metroland Media, reported that Liberal MPP Bob Delaney boasted about being proud of his government’s record of tripling the provinces debt and that he would happily do it again.

Those were Delaney’s words. But as those words spread around the province over the weekend via social media, Delaney became less proud.

So Monday he denied it. Here is how his hometown paper, Mississauga News, reported it.

On Monday (April 2), Delaney denied having made the comments to both Global News Radio AM 640 and the National Post Radio Show on SiriusXM Radio, while calling in to question the accuracy of a Mississauga News article reporting his comments.

Well lucky for the reporters, and unlucky for Delaney, the whole thing was recorded and Delaney’s words are clear as day. Mississauga News posted the audio to SoundCloud for all to hear. At the 55 second mark of this audio, Mississauga News reporter Graeme Frisque asks Delaney about the sudden rush to push for programs and huge program spending to fix problems the Liberals created or ignored over 15 years and Delaney actually tells a reporter, “bullshit” and then goes on to say all the things the original report claims he did.

Despite this, Delaney is trying to claim he never said any of this. He has tried to claim he was saying he was proud of infrastructure spending when that wasn’t what he was talking about at all.

He is even out on Facebook with sponsored posts, meaning taxpayers are paying for it, to deny he said any such thing and blame conservatives, specifically “neo-cons” for causing this problem. 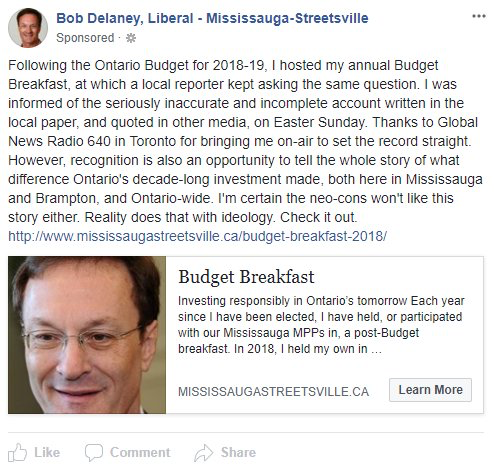 I don’t know reporter Graeme Frisque, I’ve never met him, but what he did was accurately record a politician saying he was proud of something, reported on it, and then the politician lied.

You don’t sound too proud of your record now Bob, do you?

I’ll be the first to admit that Canadians can be what Jean Chretien once called, “small town cheap.” Chretien would know, he was from a small town and also called out previous governments for what […]

Trump vs Trudeau, who is right and does it matter?

Ever since the story broke from the Washington Post that Donald Trump boasted at a fundraiser that he bluffed Justin Trudeau on whether Canada had a trade surplus with the United States, the Canadian commentariat […]

Is being critical of a female politician actually sexist?

I worry we are actually at a point where sexism means being critical of women. For anything. Ever. After having a story published in the Toronto Sun that showcased several problems with Andrea Horwath’s wardrobe […]