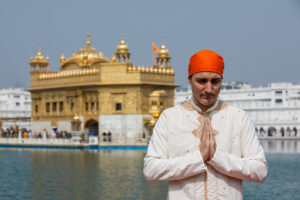 Wasn’t it just two weeks ago that the Toronto Star, official newspaper of the Liberal Party ran with the screaming headline about fixing fake news?

“Trudeau to Facebook: Fix your fake news problem or face stricter regulations,” said the Star on February 8th. The article went on to detail how Trudeau had warned Facebook Chief Operating Officer Sheryl Sandberg about the issue back in November during a meeting in Vietnam.

And yet here we are, two weeks later and the prime minister is using his own national security advisor Daniel Jean to peddle a fake news conspiracy theory as to why and how a terrorist and would be assassin was welcomed to India and invited to dinner and a reception with Trudeau’s official tour.

As you likely know by now Jaspal Atwal was part of a plot to assassinate Indian cabinet minister, Malkiat Singh Sidhu, on Vancouver Island in 1986. Atwal was part of a group, since labeled a terrorist group, that wanted a Sikh homeland carved out of the Punjab region of India. Sidhu represented that area but was seen as too moderate so Atwal and his friends ambushed his car, shot him multiple times and left him for dead.

Sidhu survived and Atwal was convicted of attempted murder for an incident a judge called an act of terrorism.

How on earth does a man like that get near the prime minister at all, never mind invited to official events with the Indian government? Especially at a time when the main concern of the India government is whether the Trudeau administration is too soft on Sikh extremists!

Trudeau swore to the government that he wasn’t soft on Khalistanis as the Sikh separtists are called, then he invited one of them, a would be assassin no less, to dinner.

At first Trudeau and crew tried to blame the “unfortunate” incident on an invitation handed out in error by Canada’s High Commissioner to India. When that didn’t work he blamed backbench Liberal MP Randeep Sarai who he alone issued the invitation. Since anyone with any knowledge knows that PMO political staff vet names on lists like this, no one believed it.

So then Trudeau tried the fake news route. He brought out Daniel Jean, the man who acts as his national security advisor, to tell the media on background how this could all be part of an elaborate plot by India to embarrass Trudeau.

Remarkably, some media outlets ran this tripe without giving much thought to how ridiculous it all is. Here is CBC’s headline:

I didn’t read all the stories out there and in fact CBC was the first place I saw this, the reporter in question offered no context or critical comment on the loopy theory that it was all an Indian plot, instead the government funded news agency printed the government’s fake news talking points.

A senior government official with knowledge of the prime minister’s security protocols is suggesting rogue political elements in India may have orchestrated the embarrassing invitation of a would-be political assassin to a formal dinner with Justin Trudeau in an attempt to make the Canadian government appear sympathetic to Sikh extremism.

They weren’t alone so it is pretty embarrassing for all involved. How did this happen?

David Akin of Global has posted a long piece detailing how this all took place in the middle of what was a very bad trip for Trudeau in India.

And then “worse” turned to “farce” when the PMO trotted out one of the most senior members of the civil service, someone who is one of the handful of bureaucrats privy to literally all the secrets of our national security agencies, to engage in frantic damage control,

After insisting that any journalist who wanted to listen to what this individual had to say could not name this person, the government tasked the bureaucrat with peddling what must be one of the most bizarre conspiracy theories ever advanced by a Canadian government: That Jaspal Atwal, the terrorist invited by the Liberals to Mumbai, may have been planted there by the Indian government or maybe by Indian security agencies or perhaps by factions in the Indian government. Whatever that means.

I understand agreeing to the PMO’s terms and agreeing not to identify the person. I’ve been in those meetings in the past but not this time, bureau chiefs are summoned, the government will release information but only on background. The deal is that you agree to their terms or you leave the room before they reveal their news. So of course you stay.

That doesn’t mean you publish their drivel if that is what they serve up. Especially not verbatim.

Using the national security advisor, someone that is supposed to be a non-partisan civil servant to push what can only be described as lies, innuendo and falsehoods to deal with what is clearly a political issue brought on by the penchant for Trudeau’s party to play footsies with extremists is beyond the pale.

This never should have happened.

It is also the very thing that Trudeau says he wants to stamp out, fake news.

Without a hint of irony, at the same time the Trudeau government was peddling their own fake news, Karina Gould, the minister for democratic institutions, was on CBC of all places saying the government is ready to act against fake news.

It would be funny if it were not so damned serious. Here we have a government that is promising to bailout newspapers, that has increased funding to CBC – effectively making all of them less likely to bite the hand that feeds them – now threatening action against what it deems false news.

Did you know that an Indian news executive who was invited to the big reception for Trudeau in New Delhi had his invitation rescinded after publishing critical articles on Trudeau and his government’s coziness with Sikh extremists?

I don’t know about you but I don’t want Trudeau, Butts and Gould deciding what is real and fake news for me anytime soon.